Indonesia and G7 countries, as well as Denmark and Norway, launched a C$26.5-billion (314 trillion Indonesian rupiahs) Just Energy Transition Partnership (JETP), during the G20 summit in Bali, Indonesia, from November 15-16. This JETP, the largest country-specific climate investment of its kind, will help accelerate Indonesia’s transition from fossil fuels to renewables and cap power-sector emissions by 2030 through a long-term, comprehensive investment plan. The announcement, however, comes amid approvals in Indonesia for new off-grid coal plants.

As one of the world’s largest greenhouse gas emitters, Indonesia is the second country to conclude a JETP. South Africa, France, Germany, the U.K., and the U.S., along with the EU, launched the first-ever JETP in 2021. JETPs are climate financing agreements aimed at accelerating the decommissioning of coal-fired power plants, facilitating the provision of private sector capital for decarbonization projects, and ensuring an equitable transition for communities affected by the shift from fossil-fuel dependent activities. The Indonesia JETP is supported by the International Partners Group. The U.S. and Japan are joint leads on the Indonesia JETP, along with the U.K., Germany, France, the EU, Canada, Italy, Norway, and Denmark.

Indonesia has stepped up its leadership on international co-operation on climate change and clean energy transition through its active engagement at COP27, the recent G20 presidency, and its upcoming ASEAN chairmanship in 2023. The ambitious Indonesia JETP demonstrates the country’s political will to lead by example in championing a clean energy transition in its coal-fired power sector, its highest-emitting sector. If implemented successfully, the JETP could fast-track clean energy transition and net-zero plans by roughly seven years, enabling Indonesia to tap into its abundant solar, geothermal, wind, hydropower and biofuels sources, mobilize public and private funding for the early decommissioning of coal-fired power plants, narrow infrastructure investment gaps, and provide a framework for achieving the transition in an inclusive and equitable way.

With the JETP commitment, Indonesia is cautious of the need to balance industrial development and economic growth considerations against emissions reductions. Challenges abound for Indonesia in achieving its clean energy transition goals. The country is lagging in its target of increasing its renewable energy share mix from 11 per cent to 23 per cent by 2025. To close this gap, massive investments are needed, which are being held up due to strict local rules, lack of transparency in procurement, and a monopolized electricity market. 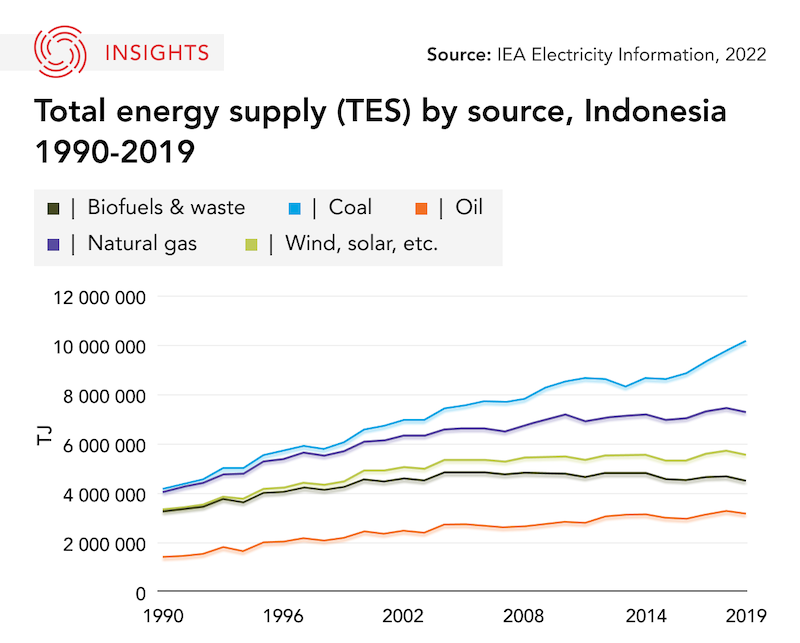 While the action plans of the JETP and the allocation of pledged funding are still unclear, criticisms are mounting as Indonesia simultaneously approves the construction of new off-grid, or ‘captive,’ coal plants. These plants are part of the country’s 10-year energy plan, covered by a presidential regulation. The captive coal plants are specifically developed to supply certain industries. Although the JETP notes the development of a “strategy” to avoid such plants and plans to identify investments in renewables as alternatives for all new captive projects, the details remain blurry. The next six months will be crucial as Indonesia fleshes out a detailed JETP implementation plan.

Academics and environmental groups have criticized JETPs for exacerbating recipient countries’ debts. South Africa received only around four per cent of its financing as part of its JETP in the form of grants. The financial structure of Indonesia’s JETP is currently being finalized, and the amount of debt the country will contract under this agreement remains to be seen. Indonesia has a relatively low level of debt-to-GDP ratio (30%) but could see its public debt increase depending on the financial package.

Two similar G7 JETPs are currently in the works with Vietnam and India. Negotiations with Vietnam have stalled over disagreements on the financial package and the required pace of energy transition. Vietnam’s Minister for Natural Resources and Environment is nonetheless reportedly committed to finalizing the agreement before the end of 2022. Negotiations are ongoing with India in the hopes of launching a partnership on an equitable energy transition during India’s G20 presidency in 2023. The lessons learned from the negotiation process with Indonesia will be important for refining ongoing and future partnerships across the region.