Japan’s Technical Intern Training Program has long been criticized as a cover for importing cheap, short-term foreign labour. As reports of exploitation and abuse towards migrant labourers rise, Japan’s government has begun a panel review of the program. This has been seen as a small step forward in revising the country’s outlook on foreign workers – and Japan’s immigration policies at large.

On November 22, the Japanese government created a 15-member panel to review the country’s controversial Technical Intern Training Program. The panel, chaired by the president of the Japan International Cooperation Agency (JICA), will include academics, lawyers, and municipal government officials. They will submit a report on their findings and recommendations by fall 2023.

Since the program’s launch in 1993, it has received significant international and domestic criticism due to the poor treatment of foreign workers, who are often exploited and subjected to human rights violations. Many view the program as a cover for Japanese companies to import cheap, short-term foreign labourers who are unable to bring family into Japan, change their jobs, or make long-term plans due to the five-year limit of the intern program.

A 2017 law helped the Japanese government strengthen its supervision of entities that accept technical interns. The government said at that time that it would review the program in five years. In February 2022, justice minister Furukawa Yoshihisa conducted several study sessions on the program. In August 2022, he summarized the problems, stating that “the basic philosophy of the program and its actual operation” have gradually diverged. The panel review presents an opportunity to address the country’s deep-rooted problems associated with the treatment of foreign labourers.

In 2021, Japan had approximately 1.73 million foreign workers, accounting for three per cent of the total workforce. Technical interns made up 20 per cent of Japan’s entire foreign workforce. With the easing of Japan’s strict COVID-19 restrictions in October 2022, more than 400,000 valid visa-holders – mostly students and technical interns (70%) – who have waited for two years to enter Japan are expected to trickle into the country. 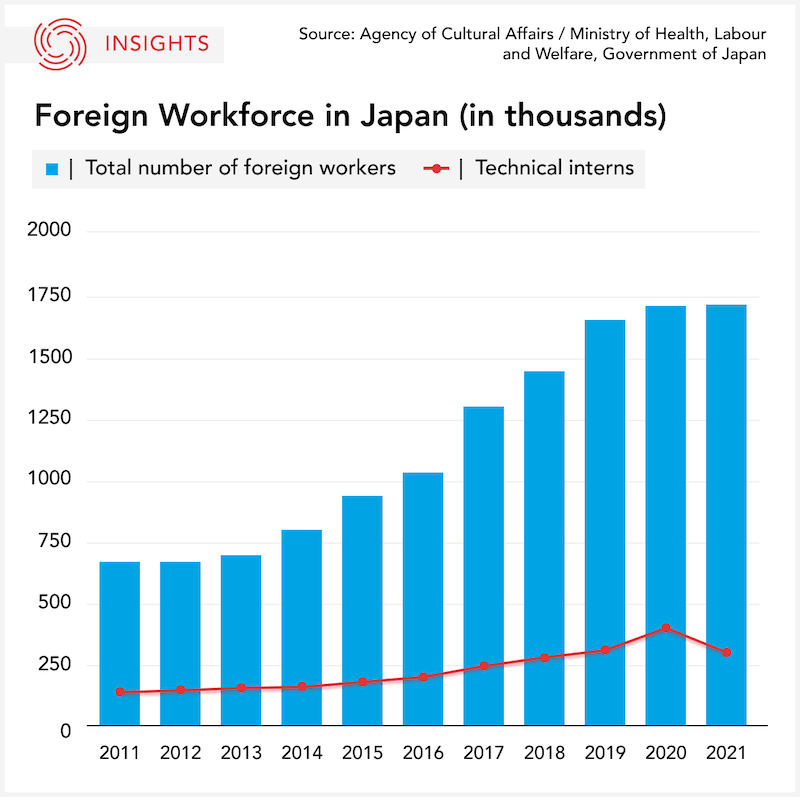 Although Japan has historically had a low level of immigration, the numbers have more than doubled in the last decade. A study by JICA in February 2022 shows that due to Japan’s rapidly aging and declining population, Japan will need a foreign labour force of 6.74 million in 2040 – plus large advancements in technology – to maintain economic growth of 1.2 per cent. Without such technological advances, Japan would need more than 21 million foreign workers. However, the depreciation of the yen, Japan’s low average wage (which has declined by 40 per cent in the last decade), increased regional competition for foreign labour, and the rising reports of exploitation in the technical internship program has made Japan less attractive for foreign workers.

Japan is faced with a paradox of increasing demand for foreign labour in a system lacking adequate accommodation for foreigners. Expectations are high for the panel proposals on effective alternatives and proposals to better address the structural issues of the training program. Yet even with potential policy advancements through the panel, experts point to hurdles in implementation due to widespread skepticism toward foreigners in Japan, which could make it difficult for businesses and society to embrace and integrate the large number of foreign workers needed in the long run.