Anwar Ibrahim, the controversial political reformist and chairman of the Pakatan Harapan (PH) coalition, was sworn in as Malaysian prime minister on November 24, following an inconclusive November 19 general election. Anwar’s coalition failed to form a majority government even after winning the most seats, with 82. As no major coalition of political parties won enough seats to form government, the Barisan Nasional (BN) coalition, after direct entreaties by the Malaysian king, finally agreed to join Anwar’s coalition, pushing the latter past the 112-seat threshold needed to form a government. His newly formed multi-ethnic coalition government signals a paradigm shift in Malaysia’s political and economic governance.

Following a turbulent election that led to a hung parliament – the first in Malaysia’s political history – Anwar’s centre-left PH coalition faced the challenge of forming a government. When the PH failed to form an alliance with the Perikatan Nasional (PN) coalition, which came in second with 73 seats, King Sultan Abdullah intervened to determine the formation of a new unity government, which led to Anwar’s appointment as prime minister on November 24. Anwar succeeded in securing 112 seats, the minimum required to form a majority government, with support from rival coalitions — BN, which came in third with 30 seats, and Gabungan Parti Sarawak (GPS), which netted 23 seats. Anwar’s new unity government now includes PH, BN, GPS, and Gabungan Rakyat Sabah (GRS). PN is the only major coalition in the opposition. Anwar has pledged to form a leaner cabinet and address human rights issues, corruption, and economic recovery. However, challenges lie ahead for Anwar in balancing the distribution of power among his allies, which will ensure the stability of his government. 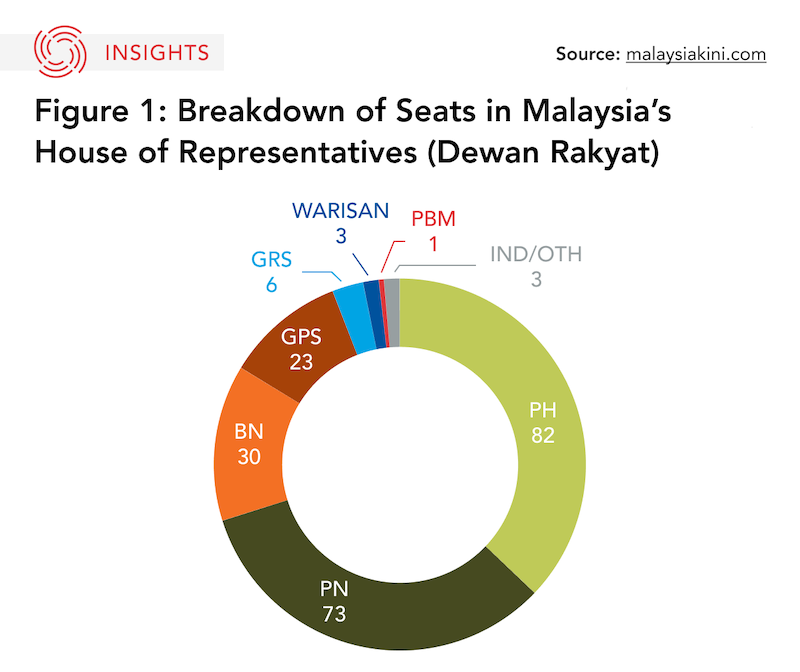 Anwar’s reformist leadership comes at an opportune time to stabilize Malaysia’s political governance and revive the country’s sluggish economy, which grew 3.1 per cent in 2021. Malaysian domestic politics have been historically polarized on the basis of race and religion, and the country has, more recently, seen its global reputation tarnished by the 1Malaysia Development Berhad (1MDB) scandal, which involved former Malaysian prime minister and ex-chairman of BN, Najib Razak. BN ruled the nation for 61 years until it lost power to the previous PH coalition in 2018.

The fourth prime minister in as many years, Anwar envisions an inclusive, equitable, and rules-based competition-centred economy and a united government embracing multiculturalism. Hopes are high for the country’s long-term economic plan after years of political instability, high inflation, and a sluggish economy – which he has begun to address by downsizing his cabinet and reducing the monthly salary of ministers by 20 per cent. Achieving this new vision for the country will be challenging in an ethnically divided coalition government in which the Malay-centric BN coalition could see Anwar’s vision as a threat to institutions supporting the ethno-political status quo. It’s a double-edged sword for Anwar, who must deliver on his vision and also prevent a falling out with his allies.

Anwar's cabinet announcement on December 2 demonstrates his strategic efforts to unite a government with divergent interests. Critics are wary of corruption and bad governance as he decides to concurrently assume the finance minister role as well as selecting ministers, particularly Ahmad Zahid Hamidi from BN, as one of his deputy prime ministers. Hamidi was charged in 2018 with 47 counts of corruption and money laundering. The other deputy prime minister is Fadillah Yusof from GPS. It remains to be seen if Anwar can steer his government to revive Malaysia’s economy. But before he executes his policies and strategies, Anwar will be tested at a December 19 confidence vote, scheduled for when parliament reconvenes.

Although not constitutionally required, Anwar has nonetheless called for a vote of confidence after the Leader of the Opposition and former prime minister, Muhyiddin Yassin of PN, disputed the majority support that the PH had secured. Observers have mixed views of Anwar’s call – some view him as being overconfident and the vote a risky move, given the fragmented nature of the coalition. Others think Anwar will emerge victorious, with full support in parliament, legitimizing his leadership. If he wins the vote of confidence, he will face the Herculean task of maintaining a united, stable government, especially when state elections begin in 2023.

The Comprehensive and Progressive Agreement for Trans-Pacific Partnership came into force in Malaysia on November 29, 2022. Tough decisions on the enforcement of the CPTPP in Malaysia lie ahead for Anwar’s government, as opposing forces urge postponing the enforcement of the ratified agreement, reminding him of his call to the previous government to reconsider Malaysia’s participation in the CPTPP after a thorough study of its impact on national interests.